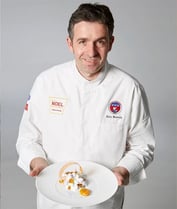 Born in France, surrounded by fruit trees, Eric Bertoia soon discovered that exceptional desserts could be made out of those marvelous gifts from nature.

Today, Eric is the Corporate Pastry Chef at Paris Gourmet and manages a culinary team of 4 pastry chef technicians. He has the experience and versatility to bridge classic French patisserie and the flourishing modern American pastry. Chef Frédéric Larré’s enjoyment of culinary delights goes farther back than he can remember. At age 16, right after high school, he started his career as an apprentice at Honoré Pâtissier in Paris, France. During his obligatory duty to the French Armed Forces, Larré served as pastry chef at Élysée Palace, the official residence of the President of the French Republic. Since then, nothing has brought him more pleasure than presenting his amazing creations and decadent treats at lavish events and intimate in-home gatherings.

After landing in New York City from his home in France, Larré began working in the pastry kitchen at the Payard Pâtisserie & Bistro at the age of 23. In 1998, Chef Larré joined the opening team at the renowned Bellagio in Las Vegas which lead to a 5 year stint at Le Cirque at the Bellagio. He has served as pastry chef at other outstanding Vegas properties such as Mandalay Bay’s Mix and Vdara Hotel & Spa operated by MGM Resorts International.

Working alongside world-renowned chefs like Alain Ducasse and Jean-Philippe Maury has allowed him to gain the knowledge that has made him a master craftsman of the beautiful pastries he creates. Even with his great success professionally, Larré very much enjoys cooking for family and friends.

Chef Larré’s enjoyment of life, passion for the art of French pastry, exceptional leadership skills and dedication to using only the finest ingredients makes him the perfect addition to STARR Restaurants Catering Group as Divisional Executive Pastry Chef. Chef Larré Moved to the Houston area in February of 2014 to join the compass group as Executive Pastry Chef for the ExxonMobil campus located in the woodlands. In June of 2015 Chef Larré was introduced to the French Culinary Academy, the oldest culinary academy in the world, founded in 1883. 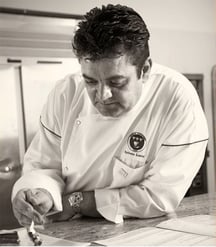 Sylvain Leroy began his career as apprentice for the great Pastry Chef and Traiteur Jean Roger Lenne at the 'Maison Schaetjens' in his hometown of Amiens, France. He later continued to expand his knowledge and creativity under many of the great chefs of France: Paul Bugat, MOF Patrick Chevallot, MOF Gabriel Paillasson, MOF Louis Grondart Chef de cuisine (Restaurant Jules Verne) and many more.

Institutions he has taught at include: La Varenne “Chateau du Fey “Anne Willam. CIA in Napa; the French Pastry School in Chicago; Dubrulle Culinary Academy in Vancouver; Johnson & Wales in both Rhode Island and Miami. He has done many television programs including local cable stations,CNN and Food Network.

Openings for world renowned hotels: the Atlantis, Bahamas, and Dune Jean George Restaurant, ST Regis Bora Bora also Lagoon another Jean George restaurant,US Grant San Diego created great experiences for creating quality under pressure. ( From managing brand new teams, recipes, budgets and style) with a short window of time for application. Kitchen time at some of the top tables in America has expanded his understanding of the industry in areas of management, communication, food costs and creativity with consistency.

Today, Sylvain Leroy is Paris Gourmet Maitre Chocolatier and his chief responsibilities lie with the CACAO NOEL Chocolat de Couverture brand in addition to Paris Gourmet's full portfolio. He travels all of North America conducting product seminars and visiting customers inside our national distribution base. 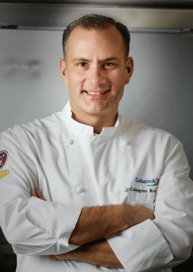 Born in Oberhausen, Germany, to Italian immigrants from Sicily, Chef Calogero Romano had a “pretty sweet” upbringing, from experiencing “Kaffee and Kuchen” on Sunday afternoons in Germany to yearly family vacations alongside Sicily’s beaches in the province of Agrigento and eating granitas and gelatos in some of the most historic towns and Piazza’s in Sicily.

At the age of 13, Calogero’s family ventures brought him to New York City where he continued his education in
the American school system. While working after school in the local food industry, young Calogero now
nicknamed “Charlie”, developed a curiosity and passion for food. This led him to enroll at the Culinary Institute
of America, where he earned an Associate Degree in Baking and Pastry Arts with honors. While attending the CIA, Chef Romano did an externship at The Ritz Carlton Hotel Amelia Island, FL under the guidance of Chef James Mullaney. Working under Chef Mullaney, Charlie was heavily inspired by his mentors skill, style, work ethic, and great passion for the baking and pastry arts. He realized that he wanted to pursue the art of baking and pastry in a much larger capacity that offered a wide variety of products and services amongst the elites and most discerning clientele for a higher level of dining.

Chef Romano’s background and experience includes working at Payard Patisserie & Bistro in New York City as Chef de Partie under renowned Chef Francois Payard; Opening team member of the Ritz Carlton Hotel Central Park South in NYC under Jean Francois Bonnet; Opening team member of the Mandarin Oriental Hotel in NYC under Chef Christophe Toury. In 2012, Chef Romano was also appointed by former Secretary of State, Hillary Rodham Clinton to the U.S. State Department of American Chef Corps, which is comprised of a group of over 80 chefs as a part of the State Department’s Diplomatic Culinary Partnership. He has also appeared on the Judging Panel on Food Networks “Throwdown with Bobby Flay”. For 10 years, Chef Romano led the pastry program as the Executive Pastry Chef at the world famous Waldorf Astoria Hotel in New York City. A 1400 room city center landmark luxury hotel with 3 restaurants and 60,000 square feet of banquet facilities. Chef Romano successfully executed numerous large and prestigious events including: United Nations General Assembly; US Department of State and Presidential visits; numerous visits of foreign heads of State; Peacock Alley Brunch - - voted 10 Best by Open Table and created pastry offerings for La Chine Restaurant - which received critical acclaim from many of the country’s top critics including NY Times, Bloomberg, Forbes and more.

Today, Charlie is one of 5 Corporate Pastry Chef Technicians at Paris Gourmet. His responsibilities include: research and development of ingredients, adapting ingredients to the market, customer/chef training and extensive recipe development. He has the experience and versatility to help customers of Paris Gourmet master technique in all aspects of pastry, including chocolate & sugar work, confections, gelato & frozen desserts, various types of doughs, plated desserts and entremets.