Firmly rooted in the Norman cheesemaking tradition, Le Pommier Camembert and Brie du Pommier from Normandy are amongst the most authentic-tasting cheeses available in the USA. The milk for these cheeses is sourced from herds of the classic Normande breed in the heart of Normandy. Famous for their milk quality, this traditional breed produces rich, grassy milk that is high in the proteins needed for cheesemaking. This milk is gently pasteurized and a complex blend of cultures is added before the cheesemaking begins. A lactic set and traditional methods are used to make a cheese that will develop and ripen with proper aging.

Le Pommier Camembert exemplifies the classic Camembert characteristics of rich, full flavor and earthy mushroom notes. Brie du Pommier is made with the same cultures and techniques, but its larger form ripens differently than the smaller Camembert. Emphasizing grassy, lactic flavors, this full-flavored Brie develops complex aromas and a smooth texture as it matures.

Established in 1886, Heros vision was to preserve fruits as gently and carefully as possible, made from only the finest select fruits from Europe.

They contain no artificial flavors, colors, or preservatives - - a 100% natural product.  Hero supplies luxury hotels and fine restaurants across the globe. - - the preferred choice of top bakeries for complimenting artisan breads and pastries. 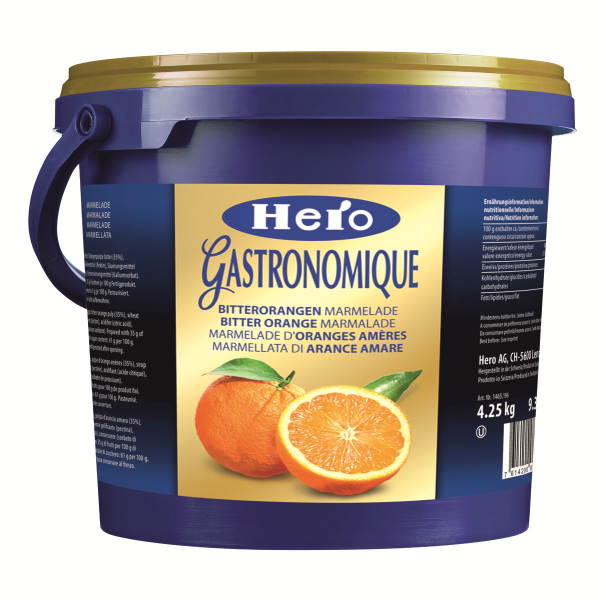 The Hero premium Fruit spreads and marmalades are now in EZ pails - - no more tins!

Easy to open with resealable lid

The producer, Dehesa Cordobesa, in El Valle de Los Padroches in Córdoba has 400,000 hectares of Holm oak forest. These oak trees produce acorns considered to be the sweetest in Spain. It is here that they allow their 100% purebred Ibérico pigs to roam freely. During autumn and winter, the pigs feed on acorns, which contributes to the meats juicy flavor and marbled appearance. The meat is dried and cured for 90 days to develop its unparalleled flavor.

The leanest of the cuts, Lomo is the loin of the pig which is cured 90 days and produced with paprika, as is customary in Spain. It is pink with some marbling of fat and a layer of fat around the edge. The only purebred loin in the U.S. market.  Slice thinly. 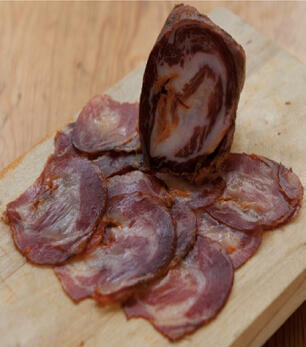 The cut of the pig with the most fat, Cabecero is the top loin of the Ibérico pig cured 90 days and produced with paprika. It is dark pink with more visible fat mixed in and very tender. It is the only cut of this nature here in the U.S. and not found often in Spain. Slice thinly.