Paris Gourmet proudly supports the efforts of the Maitres Cuisiniers de France who will participate in the Taste of France.

Eater offers a behind the scenes video peek at Paul O'Neil's stage at Pierre Gagnaire in Paris.  O'Neil topped five other finalists to win the three month stage at the Michelin three star restaurant of his choice. [Eater] 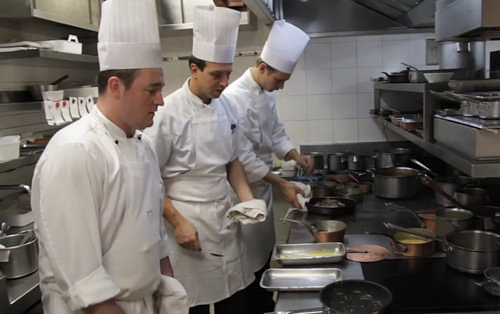 Will Foie Gras Cotton Candy Be The Next Big Hit At The State Fair?

Esters are ubiquitous, and the sucrose ester is no exception.  While technically classified as an emulsifier, sucrose esters are also used in food production to aid in aeration, texturization, starch interaction, protein protection, and fat or sugar crystallization.  Sucrose esters can also boost the action of other emulsifiers, keep starches fresh for longer periods of time, or prevent proteins from browning.  Is it any wonder the sucrose ester is found in virtually every category of edible products?

Most naturally occurring fats and oils, like olive oil or the animal fats in butter, are esters.  The main ingredient in the sucrose ester is--you guessed it--sucrose (otherwise known as granulated sugar, or plain old table sugar). Sucrose is esterified by combining it with the edible fatty acids from palm oil.

The sucrose esters wide range of applications in bakery items, cereals, confections, dairy products and sauces is a boon to food manufacturers and chefs worldwide.  It makes the production process more efficient by decreasing mixing time, keeping viscosity low, and reducing stickiness.  The sucrose esters effect on sugar and fat crystallization prevents fat bloom in chocolate and accelerates the crystallization process in candy-making.

Alternatively, the sucrose ester is increasingly used in low-fat food preparations as well.  Take reduced-fat biscuits, for example.  Simply cutting the fat in the recipe would result in a hard, dry, thoroughly unappetizing approximation of a biscuit.  But the addition of sucrose esters to the biscuit dough keeps the sugar from forming too-large agglomerates.  The sucrose esters help the fat globules that are present stay much smaller, thus keeping the sugar molecules in the biscuit finely divided and resulting in dough characteristics more similar to a full-fat dough and an enhanced mouthfeel in the finished product.

Sucrose ester is a white or ivory powder with a microcrystalline structure that is water soluble.  While it is a cold process emulsifier, it will act more quickly when heat is applied.  When utilizing sucrose esters to emulsify oils with watery mediums, first dissolve the sucrose ester in the watery ingredients before blending with the fatty medium for the best result.

For a creative and fun way to use sucrose esters, check out our Cuisine Tech video highlighting this versatile ingredient as an essential component in the creation of savory foie gras cotton candy.

And then there's this guy, who combined his life's two intense passions, Michael Jackson and cotton candy, to create a street performance spectacular.

Attack of the 210 foot Sugar Ribbon

Give Gilles Renusson enough sugar and assistants and he'll build the sugar equator!

Watch this fun video and see what happens at Grand Rapids Connumity College when Gilles decides to see how long a ribbon they can pull.  This might be the culinary video equivalent of the Harlem Shake.