If youve ever read the ingredients label on a container of yogurt, ice cream, or cream cheese, you may have wondered what, exactly, is something named after a swarming insect doing in there?  Rest assured, there arent any bug bits in your dairy fix.

Locust bean gum, AKA carob bean gum, is an all-natural food additive derived from the locust bean tree, prevalent in the Mediterranean region.  The seed pods of the tree are separated into pulp and seed, and the gum is derived from the split, milled seeds, while carob powder, with a sweet flavor somewhat similar to chocolate, is produced from the pods (the tree is also known as the carob tree). 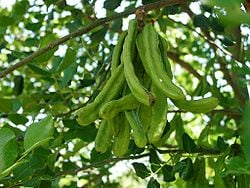 Often referred to as LBG for short, locust bean gum falls into the category of hydrocolloids, or things that help water molecules stick together.  Hence it is used as a thickening and gelling agent in food production, and its commonly found in salad dressings, sauces, meat products, breads, and breakfast cereals as well as dairy products.  Generally, food gums such as locust bean gum, xanthan gum, and guar gum make something chewier or thicker.  Excellent for freeze/thaw applications, locust bean gum is invaluable for frozen dairy preparations. It can help stabilize foods by preventing sugar or ice from crystallizing, without adding additional fat or calories. This makes it an ideal ingredient to create light foods like reduced-fat desserts or creamy sauces that still taste satisfying.

Because of its pervasive use in the industrialized world, one may think that locust bean gum powder is a recent discovery, but in fact archaeological records show that carob trees grew in Israel in 4000 B.C., and the locust bean was recorded in the writings of Theophratus in 4 B.C.  Sometimes referred to as the Egyptian fig, locust bean gum was even used to prepare bodies for mummification, and remnants of locust beans have been discovered in ancient Egyptian tombs as well as in Pompeii from circa 79 A.D.

This simple ingredient can allow you to create gelified versions of flavorful liquids, like fruit or vegetable purees, and enhance the texture of a multitude of menu items from imaginative condiments to ultra-creamy puddings.

Lecithin, first identified by French chemist and pharmacist Theodore Gobley in 1846, is a naturally occurring substance widely distributed in animal tissues and some higher plants, consisting of phospholipids linked to choline.  Lecithin is a natural lipid found in all living cells and plays a crucial role in the human body, keeping cell walls from hardening and comprising approximately 30% of the brains weight and 66% of liver fat.

The richest natural sources of lecithin are foods high in fat, such as egg yolks.  In fact, the name is derived from lekithos, the Greek word for egg yolk.  Other animal sources include liver, fish, milk, eggs, chicken, and beef.  Seeds, peanuts, wheat germ, olives, avocadoes, and cabbage are good plant sources.

Lecithin is also commercially produced.  Commercial lecithin, most commonly derived as a by-product of soybean flour and soybean oil production, is purified and non-allergenic for people with soybean allergies.  Lecithin can also be obtained from sunflowers, corn, rapeseed, and peanuts.

Chef Vincent Jaoura uses lecithin powder to emulsify the truffle foam that tops his chestnut soup.  His video demonstration is below, and a link to the recipe follows, too.

Lecithin is used in the preparation of many food products such as baked goods, chocolate, salad dressing, ice cream, and mayonnaise.  Humans can completely metabolize lecithin so it is well tolerated when ingested.  Its found in so many prepared foods because of its ability to act as an emulsification agent.  Emulsifiers help bind oil and water together and keep fats from separating, so its added to a wide variety of creamy foods with a high oil content. For example, lecithin can keep a candy bar held together by keeping the cocoa solids and the cocoa butter attached to each other and stable.  Without it, chocolate just wouldnt have that creamy, velvety texture.

Besides emulsification, lecithin is useful in its capacity to add moisture to and preserve foods, give products a longer shelf life, and as a replacement ingredient to reduce fat content and/or replace eggs.  It is often used in baked goods to improve doughs ability to rise and keep it from sticking.  Lecithin is also a surfactant, which means it allows liquids to spread out and be absorbed more quickly.  Thats another reason why its added to cake and other pastry mixesliquids mix in more easily, resulting in a smoother batter with fewer clumps.

Lecithin is also popular in molecular gastronomy, as it allows chefs to create foams out of almost any flavorful liquid.